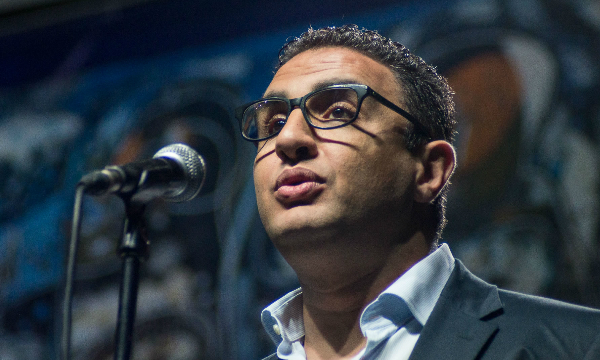 This workshop is now sold out.

Najwan Darwish is a leading voice in contemporary Arabic literature, working as a poet, journalist, editor and critic. The New York Review of Books has described him as "one of the foremost Arabic-language poets of his generation" and Canadian poet Amal El-Mohtar said Darwish has "a voice simultaneously so passionate and so matter-of-fact that it stops the breath.” Darwish’s life and work will be introduced by returning guest translator Atef Alshaer who has led a number of our recent workshops on Arabic poetry.

To attend this workshop, and the rest in our winter season, follow this link to purchase a season pass: https://www.eventbrite.com/e/poetry-translation-workshops-winter-season-2018-tickets-48871531065

Najwan Darwish’s work has been translated into twenty languages. In 2014, US public radio included his book Nothing More To Lose as one of the best books of the year. He serves as the literary advisor to the Palestine Festival of Literature and has held key positions in cultural journalism, including Chief Editor of Min Wa Lla Magazine, and cultural critic for Al Akhbar Newspaper.

Atef Alshaer is a lecturer in Arabic Studies at the University of Westminster. He first came to London after completing his Bachelor degree in English Language and Literature at the University of Birzeit in Palestine. He went on to obtain a Masters and PhD from the Faculty of Languages and Cultures at SOAS, University of London and has taught there until 2014. He also writes and translates poetry. His latest translations include poems by the Sudanese poet, Al-Saddiq Al-Raddi.