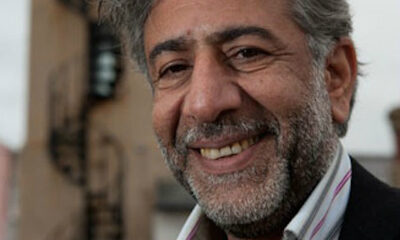 Amjad Nasser is the pseudonym of Yahya Numeiri al-Naimat, a London-based Jordanian writer, journalist and poet and one of the pioneers of modern Arabic poetry and Arabic prose poem. In 1987, Nasser co-founded Al-Quds Al-Arabi daily newspaper in London, he worked there in the decades that followed. Despite Nasser's left-wing political and ideological beliefs his poetry remained free from political slogans. His poetry emphasizes the celebration of daily life in detail, rather than raw politics.

Amjad Nasser is one of the pioneers among the young poets who after a remarkable experience with poetry, converted to prose poem. Starting with his second work entitled Mundhu jil'ad, published in 1981, he continued to write this kind of poetry with his distinctive use of the Arabic language, which critic Subhi Hadidi, said was missing his third work called Raa'at al-'uzla (1986). In his collection Surra man Raak (Happy is he who sees you), published in 1994, it recreates a new Arabic poetry of love, described by a number of Arab critics, modern and unique.

In another collection Murtaqa al anfas (the heyday of breath), published in 1997, he developed a way to both panoramic, lyrical and epic tragedy of Abu Abdullah As-Saghir, the last king Arabic in Andalusia .

In his last poetic work Hayatun sardin mutaqatta'in ka (life as an intermittent narrative) published in 2004, Amjad Nasser takes a new path in prose poetry in Arabic. It pushes the boundaries of narrative poetry unprecedented, but without watering down the poem of his poetic charge buried deep in the text.

Nasser is known mostly for his poetry and journalism, but he also wrote in other genres, he published his first novel 'Land of No Rain' in 2014, it was later translated by Jonathon Wright. His life work cuts across many genres and styles and is very diverse in its topics and images. Some of his work has been translated into English like 'A Map of Signs and Scents: New and Selected Poems, 1979–2014', brings together poems from three decades worth of collections, it was translated by Fadi Joudah and Khaled Mattawa.

The poet, novelist, journalist, and editor past away in July 2019 from cancer.