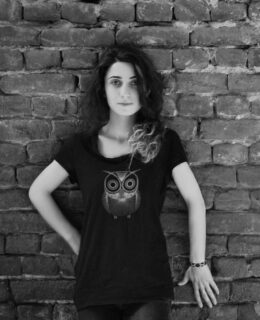 Born in 1986, in a remote village of Khevsureti in high mountainous region of Georgia, with only 50 inhabitants, is a rising star of contemporary Georgian literature scene. After graduating secondary school Lia moved to capital city and entered Georgia State University of Theatre and Film, majoring in movie directing. For a short period of time she worked at Public Theatre in Dusheti. Lia started writing at the age of twenty-five and her first verses published in the journal Literaturuli Palitra, and later displayed on author’s personal Facebook immediately became a literary breakthrough. Young poetess with an absolutely novel vision and style was suggesting a new trend, not framed in any well established clichés. In 2013 Publishing house Saunje brought together all her poems and published her debut book under the title Laughter of Devi’s Wife (Devi is a Georgian mythological character similar to European Giant). Liqokeli’s debut book was highly anticipated by Georgian audience and the following year brought to the author country’s top literary award SABA. Months later, in the same 2014, Liqokeli became winner of literary contest TSERO. Lia Liqokeli participated in the Literature Festival Insomnia organized by Karchkhadze Publishing House, and her story was included in the anthology dedicated to the festival. Recently her poetry collection Laughter of Devi’s Wife was published in Sweden by Publishing House Smockadoll. Several selected verses from the collection are included in Georgian anthology "Ich will dem Kaukasos zu", which will be published in Germany by Pop Verlag Publishing House by the end of 2015.