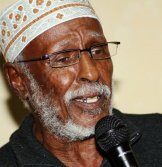 Maxamed Ibraahin Warsame 'Hadraawi' was widely regarded as the greatest living Somali poet. Born in 1943 in Togdheer, he is known to Somalis as 'Hadraawi', a name meaning ‘the master or father of speech’.

Interweaving striking imagery and metaphor with philosophy and social commentary, Hadraawi’s poems explore universal subjects and specificities of Somali culture and context. At his charismatic recitals, audiences revel in his mastery of classical and colloquial language and his experimental use of metre and alliteration.

Hadraawi has composed more than 70 lyric songs and 200 epic poems. His early work was widely broadcast, set to music and performed by leading singers. As the social and political criticism in his poems increased, their broadcasting was stopped and in 1973 Siad Barre’s regime imprisoned Hadraawi for five years. Following release, Hadraawi orchestrated debate through the popular local form of ‘chain’ poems (to which the late Maxamed Xaashi Dhamac 'Gaarriye' was a notable contributor) and his strong new work, composed in secret, was memorised and passed from person to person.

Leaving his homeland to join the Somali National Movement based in Ethiopia, Hadraawi became the voice of resistance and self-determination; here he wrote one of his great poems, ‘Gudgude’, a social vision. Experience of exile and time in the Somali diaspora in London inspired another masterpiece, the 800-verse ‘Dabo Huwan’, which includes anti-colonial critique, satirical passages on Darwin’s Origin of Species and Barre’s ‘government’, and an articulation of a Somali modernity.

Returning home, Hadraawi led a ‘March for Peace’ promoting understanding and reconciliation across the Somali regions and the diaspora. Hadraawi teaches, encourages budding writers, and the Center for Hadraawi Literature in Hargeysa hosts workshops, reading programmes and seminars.

Hadraawi was honoured for creating profound and beautiful poems that enrich and expand the centuries-old oral poetry tradition that is central to contemporary Somali culture and identity; for sustaining shared historical awareness and inclusive discourse in divisive times; for his lifelong commitment to community development and social justice; and for building bridges, providing inspiration and promoting peace through poetry. In December 2012, Hadraawi was given the highly prestigious Prince Claus Fund Award.