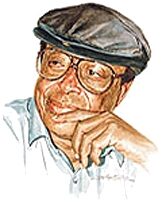 Muhammad al-Fayturi was born in Sudan – he does not know the year of his birth – in Al-Janina on the western border of Sudan. His father was a Sufi sheikh of Libyan Bedouin extraction while his mother was from a Gulf tribe which traced its lineage back to the Prophet Muhammad.

Soon after his birth his family moved to Alexandria where he spent his childhood except for a brief spell during the Second World War when the family fled to the Egyptian countryside to escape the German bombing. He attended Al-Azhar University in Cairo until 1953 where he studied the Islamic sciences philosophy and history then attended Cairo University where he studied literature for two years. In 1953 he published his first collection of poems entitled 'Songs of Africa.'

Since then Al-Fayturi has published a number of other collections including 'Sunrise and Moonset' and 'Lover from Africa'. He has also lived and worked as a journalist and writer in a variety of different countries including Lebanon Libya and Sudan itself. His poetry particularly draws on his experience as an African living amongst Arabs dealing as it does with issues of race class and colonialism and it is also influenced to some extent by Sufi philosophy.