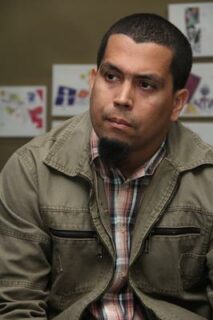 Oscar Cruz was born in Santiago de Cuba in 1979. He studied History before turning to poetry. He has been awarded ten literary prizes in Cuba during the last eleven years and has been invited to present his work in Venezuela, Colombia, Costa Rica, India and Italy. He has had 5 books of poetry published; Los Malos Inquilinos (2008, Ediciones Unión), Las Posesiones (2010, Editorial Letras Cubanas), Balada del Buen Muñeco (2013, SurEditores UNEAC), Esto el SOLO LO PEOR (2013, University of Costa Rica) and most recently La Maestranza (2014, Ediciones Unión). He has also published a translation of George Bataille’s Le Petit.

His work has been translated into English, French, Italian, Hindi and Portuguese.

Oscar belongs to Generation O, the group of Cuban poets who grew up in the 1990’s, a time of staggering isolation and deprivation on the island. Oscar’s playful and often dirty verse is self-consciously set to the backdrop of Cuba’s towering literary cannon. The poet struggles for validation in a world where necessity has rendered the poetical superfluous. His anecdotal poetry, peppered with sex and violence, is at once both humorous and tragic. In Cruz’s Cuba, men and women are made equal not by the system that rules them, but by the fact they’re all just ‘brutes with machetes’.

Oscar currently works as the editor of the literary journal La Noria in Santiago de Cuba and is working on his latest collection of poems.