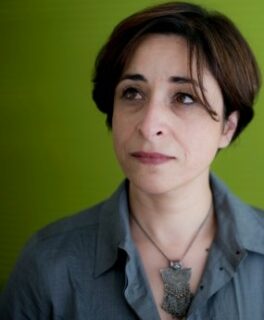 Shakila Azizzada was born in Kabul in Afghanistan in 1964. During her middle school and university years in Kabul, she started writing stories and poems, many of which were published in magazines. Her poems are unusual in their frankness and delicacy, particularly in the way she approaches intimacy and female desire, subjects which are rarely adressed by women poets writing in Dari.

After studying Law at Kabul University, Shakila read Oriental Languages and Cultures at Utrecht University in The Netherlands, where she now lives. She regularly publishes tales, short stories, plays and poems. Her first collection of poems, Herinnering aan niets (Memories About Nothing), was published in Dutch and Dari and her second collection will be published in 2012. Several of her plays have been both published and performed, including De geur van verlangen (The Scent of Desire). She frequently performs her poems at well-established forums in The Netherlands and abroad.

Shakila was one of the poets who took part in the PTC's Persian Poets' Tour in May 2012. Her poetry is translated by Mimi Khalvati and Zuzanna Olszewska.