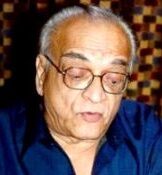 If one were to search for a name which is at once respected and popular in the entire Gujarati literature especially in the field of poetry and criticism the name of Dr. Suresh Dalal will automatically find its place amongst the most coveted ones. One would hardly come across an author of repute in any of the fourteen recognized Indian languages who would not be fondly familiar with his name. He has been an indefatigable devotee of poetry for atleast twenty five years. He has a very impressive number of volumes to his credit which include both the anthologies and the volumes of his own original poems.

Any description of Suresh Dalal must begin with his deep love for poetry. In one of his poems Dalal has said “Tomorrow is a synonym of God”; with some poetic liberty one might say that Suresh Dalal is a synonym for love of poetry a love which is reflected in everything which he does.

Suresh Dalal’s canvas is broad. His deep understanding and patient study of poetry in other languages both Eastern and Western coupled with a broad vision and a profound understanding of the human condition has enriched his observations and writings. This has made his poetry spontaneous and truthful.

Recipient of several awards he received an award for his contribution as a best teacher from Government of Maharashtra in 1980-81 and the Ranjitram Gold Medal for Creative Writing in 1983.

Suresh Parshottamdas Dalal born in 1932 in Mumbai is one of the modern Gujarati's most versatile Gujarati authors. He has led a long and successful career in academia serving as the Head of Gujarati Department at S.N.D.T. University; Vice-chancellor at M.S. University in Baroda; and a "National Lecturer" for the University Grants Commission. In addition he has served as Member Advisory Board of Gujarati Sahitya Academy (1983-1987). He left academic life to establish Image Publications and Writings as his effort to promote Gujarati literary and cultural life. In addition to his publishing firm he edits the Gujarati poetry journal Kavita and the literary quarterly Vivecana.

Dalal is an indefatigable devotee of poetry but garners respect for his essays lyrics and fiction. His poetry and other writings reflect a keen sense of observation coupled with a broad vision and understanding of human condition.

He is a recipient of such accolades as Gujarat Government Award (5 times) for his contribution to Gujarati literature and many other important literary awards. The Library of Congress has more than one hundred and ten titles by and on him including Hastakshara Kavitano ananda and Samvada as audio recordings.