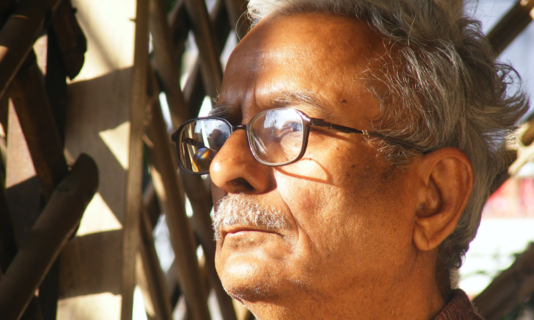 Vinod Kumar Shukla (born 1 January 1937) is one of India's leading Hindi writers, known for his style that often borders on magic-realism. His first collection of poems Lagbhag Jai Hind/Almost Jai Hind was published in 1971. Vah Aadmi Chala Gaya Naya Garam Coat Pehankar Vichar Ki Tarah/The Man Wore a New Woollen Coat and Went Away Like a Thought was his second collection of poems, published in 1981. His poetry has been featured in international publications such as Granta, Metamorphoses, and Modern Poetry in Translation. He has written six acclaimed novels, one of which won him the prestigious Sahitya Akademi Award in 1999. His first novel Naukar ki Kameez/The Servant's Shirt (1979) was also adapted as a movie by the respected Indian filmmaker Mani Kaul. He now writes poems and stories for children, and lives with his family in Raipur, Chhattisgarh, India.