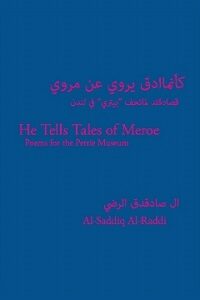 He Tells Tales of Meroe: Poems for the Petrie Museum

In 2012 Sudanese poet Al-Saddiq Al-Raddi was poet in residence at the Petrie Museum of Egyptian Archaeology, University College London. Inspired by ancient Sudanese artefacts in the collection, the poet has produced a series of poems that both illuminate early Sudanese kingdoms (often eclipsed by ancient Egypt) and his own experiences.

This dual-language collection presents eight new poems in both Arabic and English which are accompanied by stunning photographs, taken by Crispin Hughes, of the objects that inspired the poems. The volume is Introduced by professor of Egyptian Archaeology Stephen Quirke, poet Sarah Maguire and the poet himself, making it the perfect introduction to Al-Saddiq Al-Raddi’s exceptional work and the cultural history of Sudan.

* Limited edition of 300 numbered copes
* Unique insight into both ancient and contemporary Sudan from the country’s leading poet, Al-Saddiq Al-Raddi
* Illustrated by 12 colour photographs of the objects from the Petrie Museum collection that inspired the poems