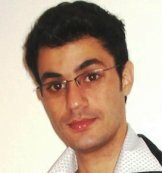 Moheb Mudessir was born in Kabul in 1982. A journalist since 2001, he has been working a Producer and Presenter for the Central Asian Services of BBC World Service.

Moheb studied Law and International Relations at London Metropolitan University. He has published many articles about Persian and Uzbek literature and culture in a wide variety of different magazines and journals and on both Afghan and Iranian websites.