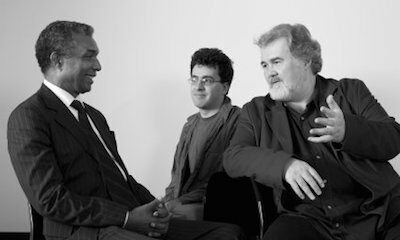 For the Poetry Translation Centre's 2008 World Poets' Tour I was charged with producing ‘literal' versions of a selection of poems by Cape Verdean poet Corsino Fortes, which would then be conjured by British poet Sean O'Brien from something unfortunate-sounding and lifeless into a working, singing English-language poem.

Born and brought up on the Cape Verdean island of São Vicente, Corsino Fortes studied in Portugal and spent much of his working life abroad, so while his work is concerned with giving voice to the life of his own country, his perspective is often that of an exile, and exile and redemptive return are among his recurring themes. Significantly he uses the oral language Cape Verdean Creole, as well as standard Portuguese (sometimes one or other, sometimes the two blended together) - itself a powerful statement reinforcing the idea of the islands' distinctive African nature. Fortes's began writing in the dying days of colonial rule, and he uses his work to reclaim, almost to recreate, his newly reborn country. But while the islands' post-colonial nature is constantly conspicuous, these are not obviously political poems, or at least not as we usually understand that term; they do not deal with the country's governments, leaders or freedom-fighting heroes, but present the islands almost mythically - a living place imbued with creative, regenerative forces.

A reasonably representative sample of about a dozen poems was chosen from Corsino's three collections (with the assistance of Stefan Tobler, who was already familiar with Corsino's work) and I produced my ‘literals', which sought (impossibly, of course) to render the poem clearly and cleanly into English while resisting any impulse to tidy, to polish, to make any aesthetic or interpretative choices at all; not to narrow down to particular choices but to open up all the possibilities a poem could encompass. The lines were often annotated with divergent possibilities, glosses on the Portuguese-language original or useful background information; here, for example, is the ‘literal' of the first half of ‘Postcards from the High Seas':

Crioula[Creole girl or woman]! you will say to the guitar [‘violão']
Of the night and to the guitar [here ‘viola' - smaller guitar] of the dawn [or v.v. early morning]
That you are a/the bride [or engaged] and dark (-skinned)
with Lela in Rotterdam
You will never sell in/through the town
From door to door
The thirst of (for) sweet [ie. fresh?] water that swings around [ie. sloshes around]
In tin cans [lit. cans of ‘Flanders leaf', which is a sort of coated steel - but basically tin cans!]

I've already sold [ie. in the past used to sell] kamoca [sort of maize flour] food [NB ‘food' in English]
on the streets of New York
I've played ourin [strategy game related to Ghanaian ‘oware'] in the beams/girders
of the sky-scrapers being built
In a building in Belfast
There remained bones and skulls
Of contemporaries
The blood still retains/keeps [this ‘retine' echoes the word ‘retina' above]
alive
in the nostrils of the telephones

Islander ears heard
The sun-drenched voice in the Olympic throat
Of a mortar [as in pestle, not as in military shell] in the streets of Finland...
etc.

Once these literals had been done and handed over to Sean, my job would be to look over his work with the original in mind, and draw attention to misunderstandings, or moments where I felt the English poem had strayed too far from its Portuguese-language moorings. This is not a common experience for a translator - we usually find ourselves straining slightly against the original, pulling against it to see if we can get a bit more slack, but in this process I was (not meaning it to sound antagonistic) ‘on the same side' as the original, pulling against the new version - the role usually reserved for the naturally protective translated writer, whose representative I had to be...

It's worth mentioning that there were difficulties to the process, certainly, both poetic/aesthetic/linguistic (of which more in a moment) and logistical. These latter were partly a result of the struggle to find a way of articulating a number of busy schedules, and partly because of the initial difficulties in contacting Fortes - as a result the poems were chosen without his input, and the translation process itself was curtailed. Earlier intervention from him would certainly have allowed me to be more confident and bolder in my initial work, and would have allowed time for more iterations between Sean and myself. Reading the poems aloud alongside the originals at an event Fortes and I took part in, I did feel some inadequacies - not, it should be said, primarily problems with the target poems per se, so much as to do with their anchoring to the original - we may have come slightly adrift occasionally, and more time (and more iterations) would have allowed more rigour. But these are small matters, only.

The other problems were more significant in some respects, and also more interesting, and arise from the fact that the voice in Fortes's work is not one that renders easily in English. It's often declamatory and dramatically musical, which can come off as, at best, a little arch and archaic, at worst portentous and completely hollow. Interesting issues arose, too, of how to distinguish in English (if we should at all?) between the two languages Corsino uses in his writing.

In addition, the poems use recurring imagery that clearly resonate with a Cape Verdean reader, that more often than not have no such near-mythical associations for an Anglophone one.

(The recurrent motifs have implications for vocabulary, too, which suited me as first translator - I didn't know the Portuguese words for mortar and pestle when I started this process and had to look them up; but having looked them up I then got to recycle them, using them again and again, in poem after poem after poem...)

These recurring images and words - a pestle, a guitar, sun, beach, bread - are physical, inanimate things assigned vital and sometimes epic powers, creative power. And the poems they inhabit are strong, sonorous poems, filled with these recurring images and other strong visual moments, and unpicking each of these moment and images into its components - yes, this word means this, but there are elements of that in it, too, and echoes of the other - was a pleasing challenge.

For me, though, these challenges were not what made the experience such a rich one. The real pleasure came not with my own needfully expansive readings of the poems, but at the other end, when I handed them over to my collaborator...

I've never before agreed to translate poetry, because I've never had confidence in my own understanding of what makes a poetic line work - and certainly no sense that I could produce something that works myself. But it's something I may perhaps be starting to understand, just a little, from examining Sean's versions of my translations of the Fortes poems.

What struck me first when I read Sean's versions, was how little he had actually changed; what struck me next, was how much of a difference those little changes had made. Changing the odd word occasionally, changing the weighting of a line, moving the spring in the line by one syllable one way or another - and suddenly it sounded like a careful, precise line of fine writing. To someone who's never understood how this happens, it was sort of magical - no, that's not the right word, because it wasn't mysterious exactly, it was sort of the opposite, in fact - it was an insight into the mechanics - watching a conjuror in slow motion, a frame at a time, to see how the magical effect is actually achieved.