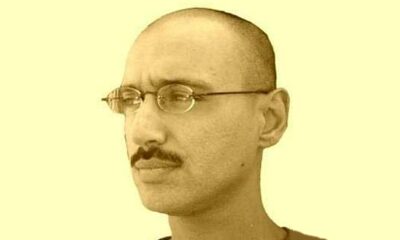 Abdullah al Ryami was born in 1965 in Cairo, where his father had taken refuge from the British-backed suppression of the Omani uprising. As a result of this displacement, Al Ryami's life has been that of an outsider. His first collection of poems was published in 1992. He helped to found the avant-garde theatre group A'Shams, where he worked as dramatist and artistic director; and Najma Publications, which specialises in modern poetry, novels and works in translation; in 2000 he returned to Oman where he works as a theatrical director, journalist and cultural commentator.

Mohamed Al Harthi, a fellow poet and friend of al Ryami's, suggests that the period he spent living outside Oman has had a clear influence on his poetry. 'Abdullah al Ryami's poetry is the poetry of solitude', he says. 'His economical sentences surprise you with their philosophical depth, building in simple, deceptively gentle phrases towards harsh images.'

Al Ryami's background in experimental theatre has also played a major role in shaping his poetry, according to one of his translators, Hafiz Kheir. In his carefully composed work Kheir says, 'Al Riyami often manages to create imaginary spaces of inner worlds, while retaining a restrained language that resists the temptation of "freewheeling lyricism" that renders a lot of his contemporaries' works either too vague or, in some cases, clearly ostentatious'.

Kheir places al Ryami within contemporary Arabic Free Verse, a wide and diverse body of poetic endeavour which emerged in the early 1960s and helped to free modern Arab poets from the limitations of traditional forms.

'After the earlier pioneering poets, such as Nazik Al Malayka and Badr Shakir Al-Sayab, rebelled against the classic forms that dictated both "ideal" subjects and "approved" musical structures, Free Verse poets seemed to leap further into the unknown, with more radical ideas that employed prose, reflective thought, and narrative techniques, as well as invoking the rich heritage of Sufi mystic writing styles', says Kheir.

Kheir is struck by al Ryami's avoidance of 'perfect metaphors and high lyricism', the pride of the classic Arab poet. 'This feature is shared among most new Free Verse poets,' says Kheir, 'but I find it very important in his case because it takes a very confrontational form. It is as if al Ryami says, "here is a potentially perfect metaphor that will impress you" and then changes his mind and completes it very differently. So it is a bit absurd, somewhat surprising, and yet still has a poetic feel.'