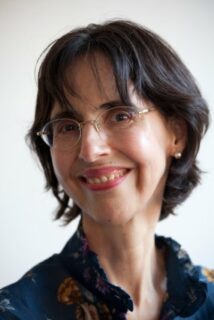 Coral Bracho was born in Mexico City in 1951. She has published six books of poems: Peces de piel fugaz [Fish of Fleeting Skin] (1977), El ser que va a morir [The Being that is Going to Die] (1981), Tierra de entraña ardiente [Earth of Burning Entrails] (in collaboration with the painter Irma Palacios, 1992), La voluntad del ámbar [The Will of Amber] (1998), Ese espacio, ese jardín [That Space, That Garden] (2003), and Cuarto de hotel (2007). Her poems were translated for the PTC's 2005 World Poets' Tour by Tom Boll and the poet Katherine Pierpoint.

A selection from her first two collections was included in the definitive anthology of contemporary neo-baroque writing from Latin America, Medusario (1996), edited by Roberto Echavarren, José Koser and Jacobo Sefamí. Like many of the writers who operate in this line that runs from Luis de Góngora through José Lezama Lima, Bracho's early poems marry verbal luxuriance with a keen intelligence and awareness of artistic process. Yet that artistic consciousness doesn't lose sight of world. When she visited London in 2005 she described the way that her tour-de-force‘Agua de bordes lúbricos' [Water of Jellyfish] operates: ‘It tries to get close to the movement of water' with images that are ‘fleeting'; ‘you can't grasp them, they are very fluid. What remains is that continuity of water.'

The poems of La voluntad del ámbar introduce more autobiographical content. Both ‘Trazo del tiempo' [Marks of Time] and ‘Detrás de la cortina' [Behind the Curtain] recount direct memories of childhood. They also tend to rein in the long lines of the earlier collections, replacing fluid syntax with what Julio Trujillo has described as a versification that ‘no es, al cabo, una cuestión meramente rítmica sino casi silogística: el movimiento es conceptual, se pasa de una deducción a otra' [isn't, in the end, merely rhythmical but syllogistic; the movement is conceptual, it passes from one deduction to another]. That conceptual clarity is exercised further in Ese espacio, ese jardín, an extended meditation on the passage of time and the death at the heart of all life, which was awarded the Xavier Villaurrutia Prize in 2004.

Coral Bracho is also a translator of poetry and has been a member of the Sistema Nacional de Creadores since 1994.