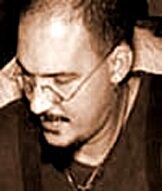 Born in Quelimane in 1963, Eduardo White is one of Mozambique's leading poets. His first collection of poetry Amar Sobre o Índico was published in 1984; he has published eight further books, the most recent being As Falas do Escorpião. The poem 'O peso da vida!' is from his third collection País de Mim (1990).

The Mozambican Press Association gave him the award Literary Figure of the Year in 2001.