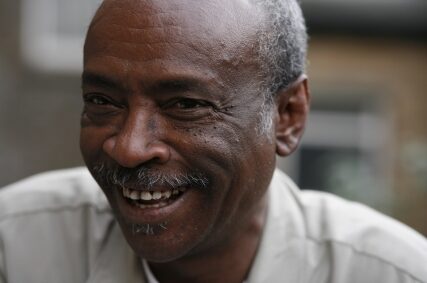 Maxamed Xaashi Dhamac 'Gaarriye' was born in Hargeysa in 1949 where he continued to live until illness forced him to leave for Norway in 2011. Gaarriye died in Oslo on 30th September, 2012.

Gaarriye attended school in Sheikh in Somaliland and then graduated with a degree in biology from the Somali National University, following which he worked as a teacher for several years. As a keen poet and literary scholar also he later worked at the Academy of Culture in Mogadishu and then as a lecturer in Somali literature at National University.

Since the 1970s Gaarriye was universally regarded as one of the most important Somali poets composing on a great variety of topics from nuclear weapons to Nelson Mandela. A poet who was never afraid to engage in the politics of Somalia through his poetry, he was the initiator of one of the largest 'chain poems''Deelley' to which many poets contributed, each one alliterating in 'd' - hence the name of the chain.

In addition to his poetry, Gaarriye was the person who first articulated the metrical patterns of Somali poetry, which he published in 1976 in a number of articles in the national newspaper of the time. This work was invaluable and a major intellectual achievement.