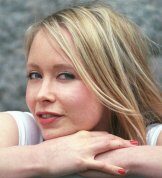 Katriina Ranne was born 1981 in Finland. She did her BA and MA in African Studies at the University of Helsinki and her PhD in Swahili literature at SOAS. Her thesis researches the image of water in the poetry of Euphrase Kezilahabi, Tanzanian modernist writer, focusing on the way in which the image of water constructs and expresses the idea of life in Kezilahabi's philosophy. During her PhD studies, Katriina stayed three months at Nordic Africa Institute in Uppsala, Sweden, as a research grant holder, and conducted fieldwork in Tanzania. She also taught Swahili and Swahili literature at SOAS.

Katriina got involved in the Poetry Translation Centre as an Erasmus student at SOAS in 2004. In 2011 she lead a workshop on the poems of Kezilahabi, the first Swahili poet to be translated by the PTC group. In addition to translating Kezilahabi's poetry into English in her PhD thesis, Katriina has published translations of Swahili and Somali poetry in Finnish in literary journals Nuori Voima and Tuli & Savu, as well as contributed several articles on African literature. Currently she is translating and editing a collection of African poetry, covering various countries and source languages; the project, funded by Satakunnan Taidetoimikunta, will result into the first collection of African poetry in Finnish. Katriina has also written a novel Minä, Sisareni (published in Finnish by Nemo, 2010). She will be a writer in residence at Villa Sarkia, Finland, in spring 2011, and at Artists' Residency of Satakunnan Taidetoimikunta in Berlin in autumn 2011.