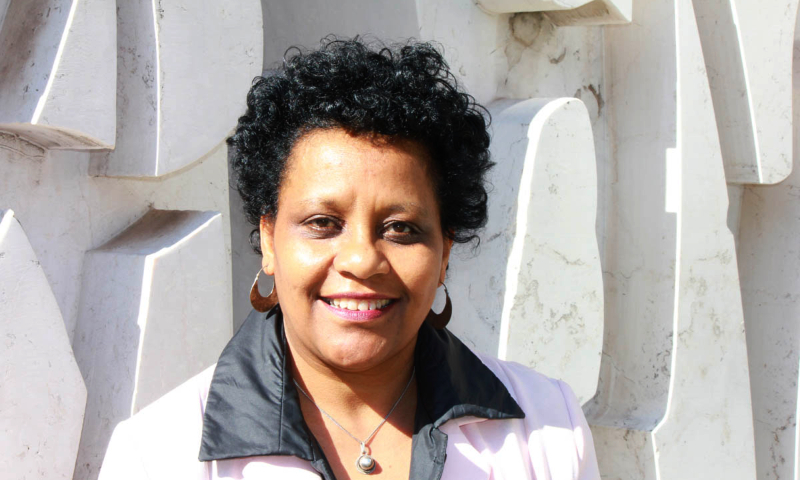 For the sixth workshop in our ‘Translating Lewisham’ series, we will be returning to the work of Eritrean poet-activist Ribka Sibhatu with her long-time translator André Naffis-Sahely. Ribka Sibhatu’s powerful poems, written in Italian and Tigrinya, reflect on the immigrant experience in Europe. She has also spent over a decade recording and reworking Tigrinya folk stories and myths. Her book Aulò Aulò Aulò was published by the PTC in 2019. The poems in this workshop will be in Italian. Poet Leo Boix will be facilitating.

Ribka Sibhatu writes in Tigrinya and Italian. Born in Asmara, Eritrea, in 1962, she was imprisoned for a year in 1979 and then fled the country in 1980. Travelling first to Ethiopia and then to France, Ribka Sibhatu moved to Italy in 1996 and settled in Rome, where she has lived ever since. She holds a PhD in communication studies from Rome's La Sapienza.

Ribka Sibhatu's first published work was Aulò! Canto Poesia dall'Eritrea (Sinnos, 1993), a collection of lyrics and prose poems originally written in Tigrinya and translated by the author into Italian. This bilingual meditation on her past life in Eritrea and subsequent experience as a migrant was followed in 1999 by Il Cittadino che non c'è. L'immigrazione nei media Italiani (EdUP): a sociological look at the Italian media's coverage of immigrant communities. In 2012 she published Il numero esatto delle stelle e altre fiabe eritree, a bilingual Italian-Tigrigna collection of Eritrean fairy tales. Ribka Sibhatu speaks five languages and currently works as a trainer, consultant and interpreter of Italian Court and other international organisations.

André Naffis-Sahely's second collection, High Desert, will be published by Bloodaxe Books in June 2022. He is also the author of The Promised Land: Poems from Itinerant Life (Penguin UK, 2017) and the editor of The Heart of a Stranger: An Anthology of Exile Literature (Pushkin Press, 2020). He has translated over twenty titles of fiction, poetry and nonfiction, including works by Honoré de Balzac, Émile Zola, Alessandro Spina, Abdellatif Laâbi, Ribka Sibhatu and Tahar Ben Jelloun. He is a Lecturer at the University of California, Davis in the US and the editor of Poetry London in the UK.

Leo Boix is a Latino British poet, translator and journalist based in the UK. He has published two collections in Spanish, Un lugarpropio (2015) and Mar de noche (2017), and was included in many anthologies, such as Ten: Poets of the New Generation (Bloodaxe) and Why Poetry? (Verve Poetry Press). His English poems have appeared in Poetry, The Poetry Review, Modern Poetry in Translation, PNReview, The Rialto, Litro, Magma, Brittle Star, Letras Libres, South Bank Poetry, The Morning Star, The Laurel Review and elsewhere. Boix is a fellow of The Complete Works Program and co-director of ‘Invisible Presence’, a scheme to nurture new young voices of Latino poets in the UK.