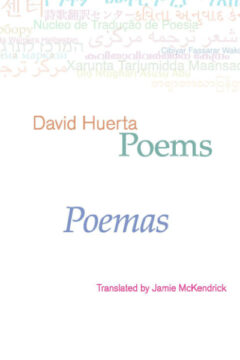 Heaven's kitchen is supplied with infernal utensils,
sagging, lilac-coloured cauldrons, fat forks
between whose prongs are tangled strings
of archangels' spit and frayed voices
that rose from the left-hand shirt of God.
A soup was being cooked when Love appeared,
a rare broth sprinkled with flaming scriptures
and glints of seaside holidays. The oil became fire,
seeped into the skin and stayed, vigorous,
iridescent, in the eyes of the blessed.
The elaborate coven stopped work: elongated odours
invaded the heavenly kitchen; pure spices
for the feverish construction of Spring
and its rippling; Aprils whose flowers are teeth,
whose jaws are crammed with dragonflies;
Eros's entire wardrobe for the Salad
with its curled coiffure; the brilliance of stabbed embraces
and the sea of hands, blue as can be, multiplying.

Other poems by David Huerta

Other poems in Spanish

Other poems from Mexico