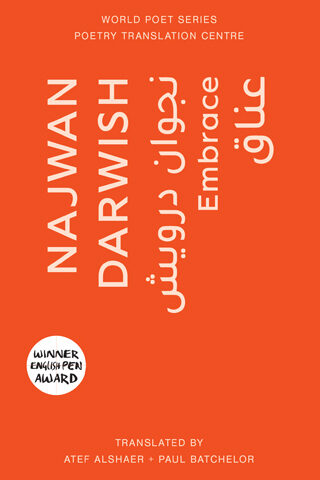 Najwan Darwish is one of the most significant voices to have emerged in Arabic this century. His poems – often written in response to historical injustices in Palestine and beyond – can be woundingly direct or disconcertingly witty. He published his first book of poetry in 2000 and has been an important literary figure ever since; his work has been translated into over twenty languages. The New York Review Books, which published the English translation of his collection Nothing More to Lose in 2014, describes him as ‘one of the foremost Arabic-language poets of his generation’. This selection of his recent work showcases the variety and force of his lyric talent, and includes an afterword by Manash Firaq Bhattacharjee.

"Embrace by Najwan Darwish continues the Poetry Translation Centre's amazing project to bring work from all over the world to the attention of English-speaking eyes and ears. Darwish is very much a poet for our fractured times and works hard to make work that is at once approachable but which also sings with great depth of meaning. As he says 'We will keep meeting and bidding farewell/like two lost waves in a vast sea’."
- Ian McMillan