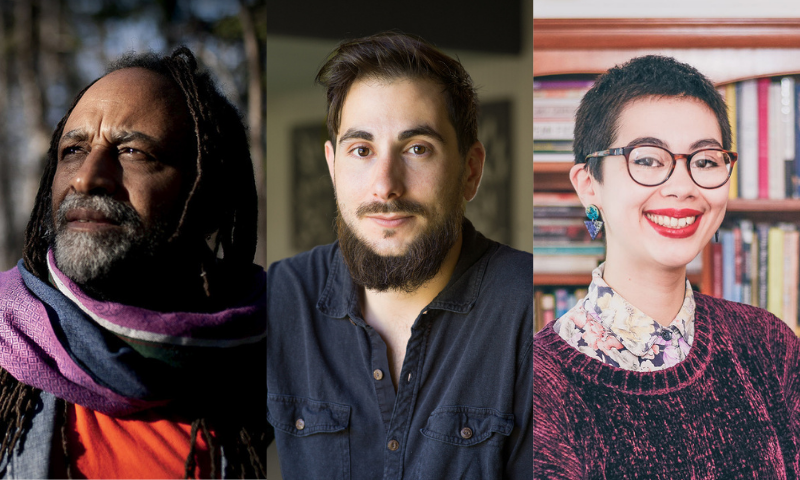 For the fourth workshop in our ‘Translating Lewisham’ series, we will be looking at an amazing poem by Haitian-Canadian poet Rodney Saint-Éloi with guest translator André Naffis-Sahely. Rodney Saint-Éloi’s poems, written in French, explore his relationship with his home country of Haiti and his place in an increasingly globalised planet. Poet Helen Bowell will be facilitating.

Rodney Saint-Éloi is a Haitian-Canadian poet. Born and raised in Cavaellon, Haiti, he relocated to Montreal in 2001. He is a prolific poet and anthologist and he runs the publishing house Éditions Mémoire d'encrier. He was elected to the Académie des lettres du Québec in 2015 and was made a Compagnon de l’Ordre des Arts et des Lettres du Québec in 2019. His latest project, co-written with Yara El-Ghadban, is entitled Racists Have Never Seen The Sea and was published in October 2021.

André Naffis-Sahely's second collection, High Desert, will be published by Bloodaxe Books in June 2022. He is also the author of The Promised Land: Poems from Itinerant Life (Penguin UK, 2017) and the editor of The Heart of a Stranger: An Anthology of Exile Literature (Pushkin Press, 2020). He has translated over twenty titles of fiction, poetry and nonfiction, including works by Honoré de Balzac, Émile Zola, Alessandro Spina, Abdellatif Laâbi, Ribka Sibhatu and Tahar Ben Jelloun. He is a Lecturer at the University of California, Davis in the US and the editor of Poetry London in the UK.

Helen Bowell is London-based poet and co-director of Dead [Women] Poets Society. In 2020, she co-guest-edited an issue of Modern Poetry in Translation (focus on dead women poets). She is a Ledbury Poetry Critic, and an alumna of The Writing Squad, Roundhouse Poetry Collective, London Writers Awards and London Library Emerging Writers programme. Her debut pamphlet The Barman was published by Bad Betty Press in 2022. She works at The Poetry Society.