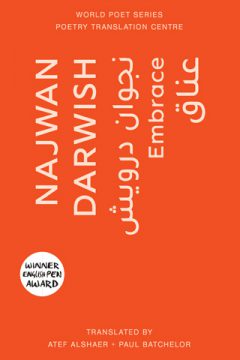 The bridge-translator, Atef Alshaer, explained to us that in the poem the lines, particularly of the first stanza seemed to stand on their own, a series of images. The images themselves seem to come from the dangerous and often lethal sea journeys that refugees endure to try and reach places of safety. Yet though the moral impetus behind the poem seems straightforwardly laudable the poem itself is by no means a simple affair. As we worked through the lines, we felt as if they were internally motivated by a series of contradictions. The very first word, “Confused”, becomes confusing - it’s easy to think of a drenched corpse but what is a confused corpse? And then there is the startlingly idea of a corpse being re-animated by a desire to embrace the very force which destroyed it.

The part of the poem that generated the most discussion in the workshop was how best to translate the penultimate line. In Arabic the word “مستميتةً” has its root in the word for death but Atef had initially suggested “desperate to” in his bridge translation. Some of the group felt that we needed to be true to the root of the word and the implicit wordplay on dying, where others worried that, in English, the punning nature of “dying to” might distract from the seriousness of the poems topic. There is, of course, a risk when translating some linguistic duality spoken in one language that, though it is spoken in earnest, it might seem trivialising in another language. For me, the sincerity of tone and obvious contradictions employed by the poet (a corpse stretching out its arms, dying in order to embrace the cause of its dead state) seem purposeful and by choosing to incorporate the present tense in the final line, “the sea that drowns it”, we tried to ensure the visceral horror of the death experienced by so many refugees remains present.

Other poems by Najwan Darwish

Other poems from Palestine