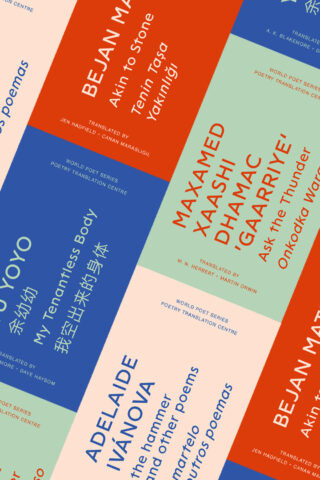 To celebrate the launch of our new World Poet Series we’re offering a bundle package of all four books for the price of three! Buy them together now and we’ll send them out to you immediately. Have the world of poetry land on our doorstep.

The World Poet Series offers a set of elegantly designed, 66-page, pocket-sized books which showcase the most exciting living poets from Africa, Asia and Latin America. The poems are presented in bilingual format across facing pages. The translations themselves bring together leading English language poets and translators. The series features an afterword essay by an acclaimed UK-based poet responding to the work.

the hammer and other poems draws on Brazilian poet Adelaide Ivánova’s award-winning book the hammer (o martelo) which explores post-rape experience in a morally bankrupt justice system and offers a potent expression of female sexuality in challenging, profound, and darkly comic poems. The poems have been brilliantly translated by the poet Rachel Long and Francisco Vilhena and the book features a fascinating critical afterword by the poet and scholar Emily Critchley.

My Tenantless Body presents the celebrated Sichuanese poet Yu Yoyo’s first publication in English. The book’s protagonist wanders the Chinese nightscape, veering in and out of focus: her thoughts always intensely clear, her feeling never simply clarified. The poems have been sensitively translated into English by the poet A.K. Blakemore and translator Dave Haysom and the poet Rebecca Tamás offers a profound interpretation in her afterword.

Maxamed Xaashi Dhamac ‘Gaarriye’ is regarded as one of the most important Somali poets of the twentieth century. This book brings together some of his most beloved work and features the never previously translated poem ‘Watergate’, a coruscating indictment of political corruption that seems all the more relevant today. The poems have been lovingly translated by the acclaimed poet W.N. Herbert and translator Martin Orwin, with Clare Pollard, poet and editor of Modern Poetry in Translation, reflecting on Gaarriye’s achievements in her afterword.

Kurdish poet Bejan Matur is one of the leading voices of a bold new women’s poetry emerging from the Middle East. This new volume presents her Turkish-language poems from all stages of her career. These electrifying translations have been made by the T.S. Eliot Prize-winning poet Jen Hadfield and translator Canan Marasligil.