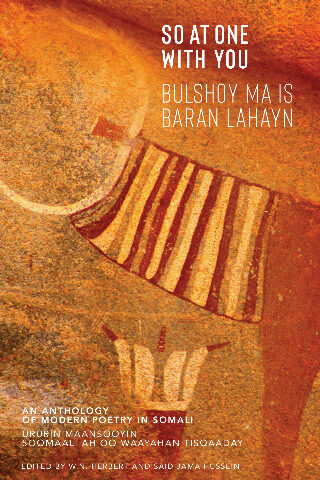 This title is currently unavailable to order while we await more stock. Please check back soon or send an email to maddy@poetrytranslation.org to receive an update when it is available again.

So At One With You is a groundbreaking dual-language anthology celebrating ten years of Somali Week Festival and the collaboration between the Poetry Translation Centre and Kayd Somali Arts and Culture.

The anthology has been expertly edited by the Somali translator and scholar Said Jama Hussein and the esteemed UK poet W.N. Herbert, who have provided a unique overview of modern poetry in Somali. The selection brings together eighteen key poets of the post-colonial era, featuring legendary figures such as Maxamed Ibraahin Warsame "Hadraawi” and Maxamed Xaashi Dhamac "Gaarriye" alongside some of the most vital poets from the younger generations including Asha Lul Mohamud Yusuf and Maxamed Muxumed Cabdi "Haykal".

The anthology begins with an illuminating introduction by the editors tracing some of the main influences and relationship that have made the current selection possible and ends with two newly commissioned essays by Xasan Daahir Ismaaciil "Weedhsame" and Dr Martin Orwin.

"From the high culture artefact of the gabay to the work-song or hees hawleed, these poems offer a fascinating insight into the deep attachment Somali people have to verse."
- Jade Cuttle, Magma