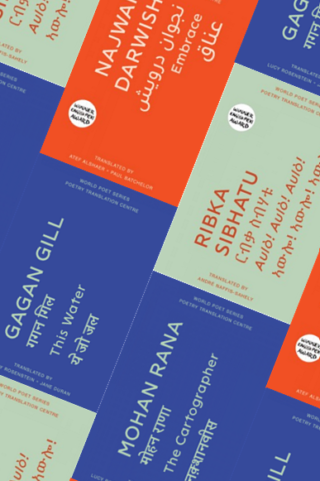 The four collections offer you short introductions to contemporary writers of real importance from around the world and are a pleasure to read.

The World Poet Series offers a set of elegantly designed, 66-page, pocket-sized books which showcase the most exciting living poets from Africa, Asia and Latin America. The poems are presented in bilingual format across facing pages. The translations themselves bring together leading English language poets and translators. The series features an afterword essay by an acclaimed UK-based poet responding to the work.

The Palestinian poet Najwan Darwish is one of the most important writers to have emerged in Arabic since the turn of the century. The New York Review of Books even says he is “one of the foremost Arabic-language poets of his generation”. As a poet and critic he has a profound impact on the contemporary poetry scene. Darwish’s style is hard to pin down, he shifts shape from one poem to another. This makes reading his collection a delight as it showcases the range of techniques displayed by one voice. Find out how he can be witty and direct, emotional truthfully and inspiringly lyrical. Najwan Darwish will be translated by Atef Alshaer and the British poet Paul Batchelor.

Ribka Sibhatu is a poet, storyteller and activist. She writes in Tigrinya and Italian. Her first published work was Aulò! Canto Poesia dall’Eritrea (Sinnos, 1993), a collection of lyrics and prose poems originally written in Tigrinya and translated by herself into Italian. The work is seen as a bilingual meditation on her past life in Eritrea and subsequent experience as a migrant in Italy. Born in Asmara, Eritrea, in 1962, Sibhatu was imprisoned for a year in 1979 and then fled the country in 1980. Her collection as part of the World Poetry Series, features work from across Ribka’s writing life. It reflects on the breadth and complexity of her poetic engagement. Ribka Sibhatu will be translated by poet, critic and editor, André Naffis-Sahely.

This year our World Poet Series will also include two reissues of PTC publications by Hindi poets expanded with additional poems and afterwords by leading UK poets.

Indian poet Mohan Rana was born in Delhi in 1964, graduated in Humanities from Delhi University. He lives in the UK well over 20 years now. This distance to India might also inform one of the striking features of his poetry: a constant question of reality and what is taken for granted. At times this comes across as a charming sometimes naive inquire and makes his work accessible to the reader. While progressing through his collection, it becomes evident that behind this apparent naivety lies a layer of complex philosophical and literary inheritance. Mohan Rana was translated by Lucy Rosenstein and the poet Bernard O'Donoghue.

Gagan Gill was born in 1959 in Delhi. She had an extremely successful career as a journalist but chose to sacrifice the journalist for the poet in her in order to secure the 'long periods of silence in her everyday life' which she considered necessary to remain 'truly connected to words'. Gagan has published four collections of poetry and one volume of prose: her first collection Ek din lautegi larki (One day the girl will return) focuses on the gamut of female experience (but also includes epigrams and verses about political events); the poems of Andhere me Buddha (Buddhas in the dark) are variations on the theme of sorrow in human existence; her third volume Yah akanksha samay nahin (Inopportune desire). Gagan Gill was translated by Lucy Rosenstein and the poet Jane Duran.